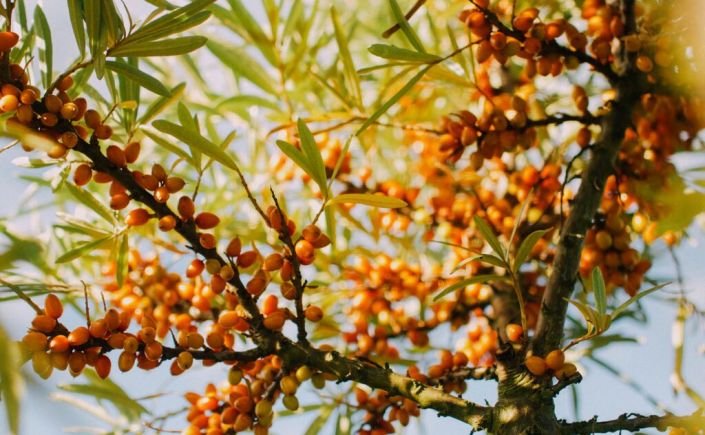 Unless you know me personally you have probably never heard of sea buckthorn, although you may have seen it growing on the coast. It has a bright orange berry and silvery green coloured leaves and it is renowned for its health benefits. It is far more popular in Europe, as well as in Russia and China, than it is in the UK where it is still largely unknown, despite growing wild in several counties. Despite its relative obscurity this plant has come to dominate my life since I came back to work on my family’s farm on the north Essex coast. My father David has been determinedly working to establishing sea buckthorn as a viable crop in the UK  for nearly a decade, with our first plants having gone in the ground in 2009. We now have over 4000 plants on just over 4 hectares of land. The plants require daily attention. We are organic (in conversion) which means no weedkiller, which means daily strimming of weeds to keep them down (sea buckthorn dislikes competition!). At this time of year, we are picking the berries. The market is currently very small in the UK so, at the moment, we are simply asking people (mostly chefs at this stage) to try the berries and see what they think. We are growing several different varieties all of which have subtly different flavours. It is certainly a unique taste!

In 2011 we formed The British Sea Buckthorn Company, through which we sell our sea buckthorn products. As well as growing our own berries we source sea buckthorn from elsewhere in the world, and have created some strong partnerships with sea buckthorn growers, processors and researchers in Russia and Germany in particular. We have been producing an equine health supplement for a few years (sea buckthorn is great for animals as well as people!) and recently launched a health supplement capsule for people using the fruit and seed oil of sea buckthorn. You can find out more at britishseabuckthorn.com .

As well as an early start to the barley harvest, which has been a slight shock to UK growers, the other main headline in countryside news in the last week or so has been the granting of World Heritage Site Status to the Lake District by UNESCO. This puts the national park at the same level of recognised importance as the Taj Mahal and the Grand Canyon. Quite an accolade. Campaigners have been trying to gain such recognition since 1986. It has been hugely welcomed by many and it is hoped that it will provide a further boost to tourism in what is already a behemoth in the countryside tourism league in the UK. However, not everybody agrees. George Monbiot has been predictably vocal in his disappointment and attacked the decision, calling it ‘a betrayal of the living world. I wouldn’t go as far as saying I agree with Monbiot, although I can see where he is coming from. There is a need for a mix of habitats in all areas, which includes the Lakes, and sheep farming should not be allowed to dominate everywhere. As a southerner who has only visited the Lakes once, I feel uncomfortable in putting forward a strong view on the matter. Nonetheless, I see the decision as a positive thing for the country, and I hope it will provide a further economic boost for this rural corner of England. However, it should not provide a reason for setting the place in ecological aspic. Conservation should look to the future as much as the past.