Ryan Elizabeth Cope is a Junior Watershed Biologist from British Columbia, Canada. She has lived and worked in several places on the coasts of both the Atlantic and the Pacific, from Hawaii to Maine. She blogs at Seven in the Ocean, usually about plastic. You can find her on twitter @sevenintheocean . In this post she writes about her first hand experience of the ‘Great Pacific Garbage Patch’.

Considering the oceans in our day-to-day lives is easiest done when you live right next to the ocean, the source, that big blue body of water spanning as far as the eye can see. When a problem is right in front of you, it’s fairly hard to ignore and you usually address that problem fairly quickly. Issues arise, however, in the unseen: as you travel away from the ocean, tracing the water’s path from the shore, upstream to the tiniest stream trickle, you might almost forget that that water is still connected to the great expanses of open ocean. It is for this reason, then, that we should all consider the oceans, even if we live in the middle of nowhere, hours from the nearest shoreline.

As it happens, I presently find myself in that exact situation: residing in western Canada, 250 miles away from the Pacific. And yet, it is precisely because of my experiences with the ocean and coming into full contact with “the big blue,” on two distinct occasions, that I am able to maintain my passion for ocean conservation while living along a giant lake in the middle of British Columbia. The oceans are plagued with a whole host of problems today but for me, the one that resonates, that has fundamentally changed how I tread on this planet, is the issue of plastic pollution.

There is something wholly unsettling about sailing through a vast expanse of ocean, hundreds of miles from any shoreline, and being repeatedly presented with evidence of human influence. This was my experience while sailing through the North Pacific Subtropical Gyre (aka “The Garbage Patch”) nine years ago. Day after day, we pulled in hundreds of tiny plastic fragments: blue, white, yellow. None of them resemble the plastic forks, bottles, and containers that we use without a second thought today, because they’ve been in the oceans for so long, slowly breaking down into smaller and smaller pieces. It never really goes “away” and is a big piece of why I will never be able to look at plastic the same way again.

The Robert C. Seamans, our 2-masted brigantine research and sailing vessel for the journey across the Gyre. Credit: Ryan Cope

But this plastic had to come from somewhere, right? As it turns out, most of it originates on land. A few years ago, I had the opportunity to spend a few months on Midway Atoll, home to the world’s largest colony of Laysan Albatross. There are two things you should know about Midway: it is very remote, and it has a huge plastic problem. But the plastic isn’t necessarily all coming in with the next big wave. No, this plastic is being brought in by the very birds that live there. Mistaking the plastic for food, they bring it back to feed their young and while most of them manage to survive to adulthood, many will die of starvation, their bellies full of fake food….fake food that came from somewhere else, from some other shoreline, blown out of someone’s recycling bin years ago. Which brings me back to my original point that all water flows downhill and this is as such a land-based problem. 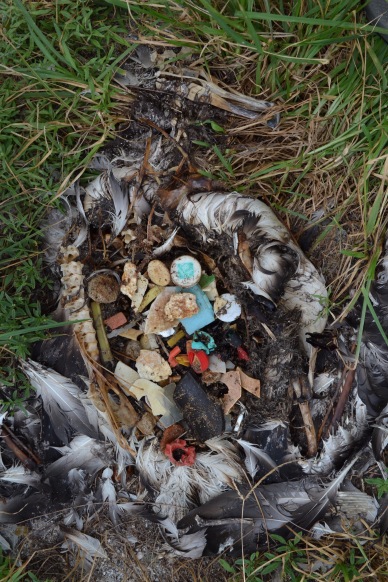 In the world of plastic pollution, it is very easy to become overwhelmed by the sheer magnitude of the problem. There’s too much plastic, too many people, the oceans are so huge! Why bother?! However, I would argue that this issue presents a golden opportunity for action. Think about it: because plastic is everywhere, this issue can be tackled from wherever you stand, be it an inland forest, coastal plain, or mountain abode! Not only that, but our voices, collectively, can cause quite a stir. I mean this literally: so many times we stay quiet, to avoid stirring the pot or making a fuss when what we really need to be doing is confronting the problem head-on. Instead of just shaking your head at the cashier that keeps double-bagging the groceries, or the restaurant that finds it necessary to put straws in every beverage…have a conversation and let them know how you feel. Be willing to be vulnerable and take a stand. Both can be scary, but in the end, wouldn’t you rather stand for something, if it means protecting our communities and ultimately, the planet?

Walk the walk and seek out ways to make the most your purchasing power – buy in bulk and if you don’t have access to it, ask for it!