Bordering the north eastern most part of our farm at Walton Hall, Walton-on-the-Naze lies an area of low lying land, owned by the District Council and protected from regular flooding by the natural, rapidly eroding cliff. This small section of eroding cliff face also protects a water treatment works which serves thousands of local people, a nature reserve run by Essex Wildlife Trust and Walton Hall marshes, part of our farm used for grazing stock. Many thousands of people visit the Naze headland, of which the farm is a major part, each year but not as many venture to this corner point where  the cliffs, which are 25m in height in the south east of the peninsula, fall to just a couple of metres. Those that come here are presented with a safety barrier and a path that falls away to the beach. When standing on the beach itself one can see why the erosion rate is so high, the geology being soft (Red Crag sands overlaying London Clay) and the poor drainage only increasing the rate of land loss.

The pressure on maintaining coastal defences has been apparent for generations at the Naze, as I discovered when I delved into the past of this fascinating little peninsula when researching for ‘Pushed to the Edge‘. Land has been ‘lost’ through erosion for centuries. However, today the situation seems unique, as the potential for complete alteration of the landscape is entirely possible. If the sea were to breach the wall now, low lying  land across the peninsula, well over 1/3 of the entire land area, would be transformed for many generations and current land use (agriculture) would no longer be possible. Further, its habitat value as coastal and floodplain grazing marsh (priority habitat) would be permanently compromised.

(I have put lost in quotation marks because I think that loss suggests a feeling of defeatism and a negative portrayal of marine environments. I want to avoid this way of thinking. Land already sits far higher in the hierarchy of value for most people than marine scapes and I think we need to move away from this. In the case of erosion, using a completely objective and neutral explanation, land is simply shifting from landscape to seascape. However, when you have a stake in the land itself – and many people do at the Naze for various reasons – other pressures exist, economic, socio-cultural and emotional, which adds to the complexity.) 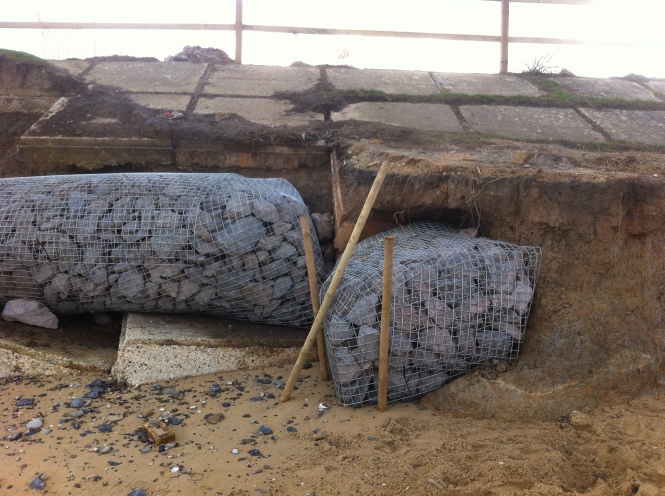 Recently the farm, with the help of the Walton and District Wildfowlers, began to construct a gabion basket defence system which will help to slow the rate of erosion at the north eastern corner and will buy some time while discussions take place to forge a longer term solution to protecting the peninsula. From my point of view, it is brilliant to see these discussions taking place in the first place. Such discussions have been going on for decades. ‘Save the Naze’ was founded in 1975 by a group of concerned local people and it was formalised to the Naze Protection Society in 1981. In 2011 a group of stakeholders, under the banner of the ‘Naze Heritage Project’ (created in 2005) secured the future of the Naze Tower and southern most section of the Naze by building the Crag Walk defence. Recently, the Naze Management Board has been formed which regularly brings all stakeholders together to discuss the issues the Naze faces. A few years ago this would have been an impossible dream. There now seems to be political appetite to solve the ‘problem’ of the north east corner and securing the medium term future of the Naze landscape itself (as well as safeguarding the low lying water treatment works). The need for this is something I discussed at length in my book and I keep everything crossed that words can be translated into real action at the site.

The above has been a rather lengthy way to introduce the key point of this article. All landscapes change in their own way over time, some more subtly than others. However, over large expanses of time, subtle changes add up and can result in immense landscape change. Shifting baseline syndrome means that each generation (or group of generations) tends to see landscapes through their own paradigm and therefore continue to see landscape changes as subtle, without acknowledging the immensity of change that the historic viewpoint provides.

Modern establishment media likes to portray the British countryside as some sort of historic constant and we are encouraged to ‘visit nature’ as a form of idealised timeless experience. The myth illustrated for us is that as people and culture (and technology) have changed, the landscape has somehow remained the same. However, anybody who has taken the time to think about the landscape and look at it closely will realise that nothing could be further from the truth. In reality, as people, culture and technology have changed, the landscape has been altered as a direct result. Similarly, people and culture have had to adapt to changing environmental conditions (think of the potential cultural changes we face in the future as a result of climate change, the impacts of disease on populations, of drought, of tsunamis and volcanic eruptions). History, nature, landscapes and culture are intimately intertwined. The challenge is in deciphering how to dissect such landscape complexity whilst still providing meaning and cultural continuity in the world.

I use the Naze as my case study partly because I know it so well. However, I also use it because it is a good example of a place where people have come to fear landscape change (even though most wouldn’t phrase it as such). In some ways, coastal landscapes seem to be constant, with each tide washing the beach clear of evidence of past activity. On the other hand they seem to be perpetually changing and anyone who walks a beach regularly will notice multiple alterations from tide to tide, including new materials washed up on the shoreline and, as in the case of the Naze, the impact the sea has on the land itself, in the form of coastal erosion. When landscape boundaries are defined, as in the case between sea and land, people who have built a stake on one side of that line are more likely to want to maintain the line. This usually means protecting the land against the sea. What we are really protecting in this instance is our own cultural practice and identity, rather than the land itself which has been dynamic since the beginning of the world.

In some ways it is dangerous for us as human beings to define certain areas of land in perpetuity for certain uses, such as agriculture, for at some point in the future, whether that be years, decades, centuries or millennia, climatic, marine or other environmental phenomenon will enforce a change. Nonetheless, it is also the custom of human beings today to identify under shared motivations and at this point in time, using the Naze example, this means the motivation to protect current land use for as many future generations as possible.

As an optimist I believe that if people come together we can do some good things. On a small, local scale, this includes the team of people coming together at the Naze to reduce the impact of coastal erosion for the coming decades. We are presented with a situation  where we can hold back the sea to continue current land use at the Naze for a number of generations to come. It therefore makes economic and cultural sense to create a plan to continue the status quo (seen through our current paradigm). However, I am also an historical realist  and due to the nature of how I see things (invariably through very long time periods) I understand that the Naze landscape as we know it cannot exist in its current form in perpetuity. That is the nature of change and the nature of landscape. It is part of the story of future generations to deal with the problems with which they are presented in the way in which they see the world. Paradigm is everything and paradigm shifts are necessary for adaptation. All we can do, as human beings in the time that we are on this planet, is deal with the problems that our generation is presented with in the ways that we see as suitable at this time.