Although the UK’s State of Nature Report (2016) shows that many species are in decline, they also report that moles (Talpa spp.) are holding their ground with an estimated population of 41 million (Ref.; Ref.). This excludes Ireland that has no moles – a hangover from the ice age – while resident moles have seemingly lived in Britain for more than 350,000 years. This obviously means the worms will have been there a wee bit longer… 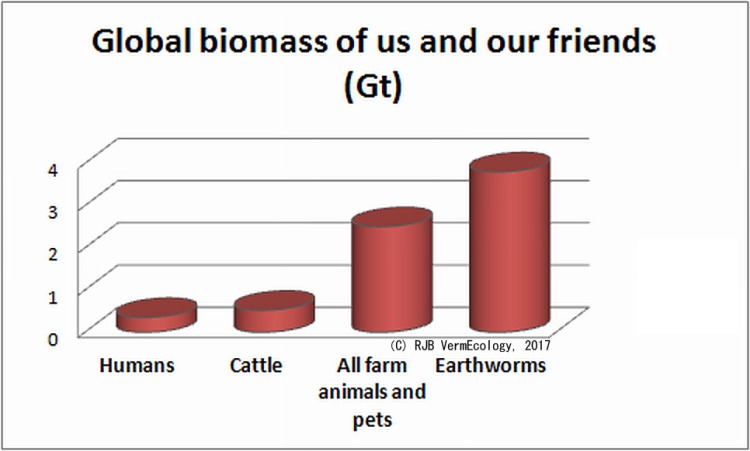 As this is only a small proportion of the earthworm population, the actual abundance must be astounding. If we take the land area of Great Britain as 24 million ha with average of 2.7 million per hectare it gives an optimal population of about 65 trillion (65,000,000,000,000) worms. So 2,050 million eaten by moles is a loss of just 0.003% per day.

Incidentally, this also means that for the 65 million human population in UK there could be a million earthworms each. These most modest beasts are our best friends & ultimate salvation: working day & night, rain or shine, burying rocks and pushing up plants for our food and enjoyment. However, these 1985 worm biodiversity figures are from over 30 years ago and in this brief time period there has been a dramatic global decline by 50-100% in earthworm populations (as with bees, other flying insects, birds and mammals, etc.) due mainly to intensification of toxic chemical farming (Ref.). Since agriculture occupies about half of all liveable land, then it is likely that the earthworms are most seriously depleted. Truly, many worms have surely “bitten the dust” already… To save Nature we need to direct all efforts to “Save the Worm” that some realize are perhaps this Planet’s most important species (Ref.).

“Moley, moley, moley” is a traditional hunting cry of some Mole Catchers.

You can visit Rob Blakemore’s blog ‘Vermecology’ by clicking here.