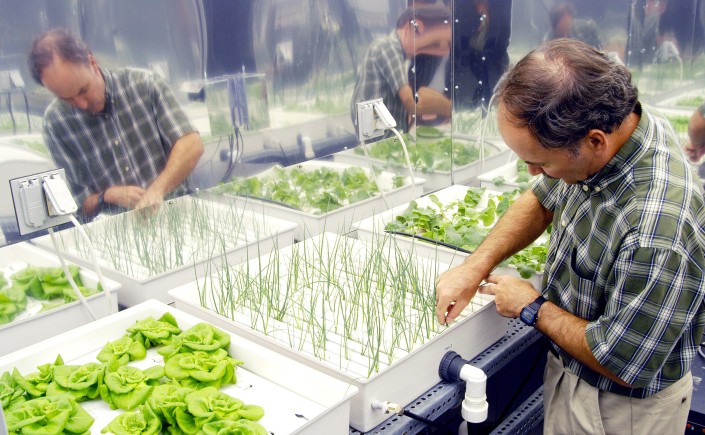 Hydroponic farming is one of the most misrepresented farming methods around the world. I mean, it sounds like an alien if not a futuristic concept growing food without a single grain of soil.

One of the major reasons hydroponics has been gaining a foothold is because studies have shown that this farming type may soon overtake conventional field farming. For example, it has recently emerged that hydroponically grown plants are of high quality, require less space and are not as resource-intense as their field counterparts. Goes without saying that urban and indoor gardening has witnessed new horizons with no sight of the ending.

Hydroponics is a soilless farming method where planting takes place in a controlled aquatic-based environment.  To many, the concept of soilless plant growing may seem like a smack to the plant’s nutritional needs. However, they actually do exceptionally well as they are sufficiently supplied with water and nutrients, which are essential for any plants to thrive.

To provide these nutrients, a nutrient solution is fed to the plants through the roots resulting in normal and healthy plants. With that said, there are multiple hydroponics systems and others don’t necessarily require substrates.

How does it work?

There are different hydroponics systems although the basics are the same.  The systems allow the roots of the plants to directly come into contact with nutrients and oxygen without factoring in the soil. As a replacement for the soil, the system uses clay pebbles, stonewool, coco coir, or vermiculite to support the roots.

For the nutrients, there is a water-based solution that’s rich in nutrients delivered directly to the plants through the roots. As a solution to the light which is essential for growth, some hydroponic systems utilize natural lighting while others solely rely on artificial lighting.

Most often people tend to mostly focus on the bias which essentially overshadows the positive characteristics. However, just like any other culture system out there, it has its good side and its ugly side.

Initially, it can prove extremely difficult to kick-start and maintain hydroponic gardens but once you have honed the skills the pros outweighs the cons.

What are the pros and cons of hydroponic gardening?

One of the most outstanding benefits of hydroponic gardening is the fact that it happens indoors. As such, planting can be done irrespective of the season and production can take place all year round. Additionally, the plants yield double compared to the soil-based farming thanks to the constant growth cycle.

With increasing concern of the food security around the world, public and private sectors are looking for farming methods that can outperform traditional farming methods. Although water and water-based solutions play an important role in producing better yields, hydroponics systems use less water as its possible to re-use and recycle.

In addition to using less water, the system doesn’t produce run-off which can destroy and degrade the environment. Even better, hydroponic farms don’t require deep wallets for upkeep and maintenance compared to traditional farms.  For example, since it’s done in controlled environments susceptibility to soil-borne diseases and pests is limited.

Thanks to the compact spaces, hydroponics gardening is ridiculously cheap in terms of labor as a few individuals can harvest and replant in a snap.

Although hydroponics farming comes with a bit of disadvantages, the advantages far outweigh the bad side. One of the major letdowns of hydroponic farming is the high initial set-up costs.While most small-scale farmers can buy or build relatively cheap equipment, large-scale farms require specialized equipment that comes with a steep price tag that can run into millions.

The second letdown although not a deal breaker is that the farms require constant monitoring and supervision.  These large farms are like toddlers who need pampering in terms of constantly keeping track of the lighting, nutrient solution, and oxygen levels. We have to agree in unison that such a modern farm is prone to unusual factors that aren’t common in traditional farms. For example, a power outage in a single day could lead to untellable losses.

As it appears, hydroponics has clear advantages and some disadvantages. However, I think that the benefits outweigh the demerits since it is a great alternative for food production in areas with poor soil. It’s also a hallmark of other great characteristics like efficiency, it is less costly, and more economical in space.

Dan Chabert – Dan is an entrepreneur, husband and ultramarathon distance runner. He spends most of his time co-managing home sites like Contractor culture, That Sweet Gift, Borncute, health sites such as Runnerclick, Nicer Shoes and The Gear Hunt. He has also been featured on runner blogs all over the world.