Out of all known habitats the soil is by far the most biodiverse and yet we know only a fraction of the information we know about other areas. I am near the beginning of my own ‘soil journey’, something that may sound a bit bizarre, but is a process of investigation that will be life long and is endlessly fascinating. I have not spent that much time on the blog discussing soil which needs to be put right! I will therefore endeavour to explore some aspects of soil biology, physics, chemistry, politics and history over the coming weeks. 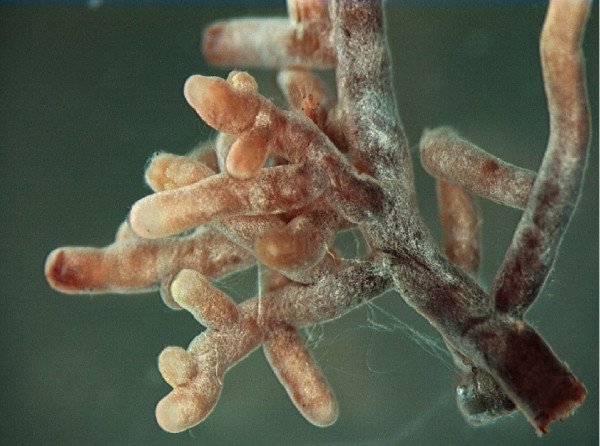 One particular soil relationship that balances mutual interest with peculiar intimacy is that betwen the roots of certain plants and networks of certain fungal species that are grouped together and categorised as mycorrhizae. The fungi colonize the root structure of the host plant and provide an increased benefit in terms of nutrient intake whilst receiving beneficial sugars from the plant which of course makes this by photosynthesis. There are hundreds of fungi that work in this mutually supportive way with host plants including the boletes and chanterelles  as well as truffles. However, the fungal species that I am referring to in the soil are often much smaller, sometime microscopic, but work together by forming huge lengths of thread structures which are referred to as hyphae. Together this forms a mycelium, which acts as the internet of the soil, connecting trees under the ground and improving the success rate of plants when the intake of minerals from the soil is concerned. This mesh of threads is often invisible to the naked eye, although there is a lot of it. A heck of a lot! Indeed, in 1 kg of soil there could be upwards of 200km of fungal hyphae!

Recent research from the University of Leeds showed quite how the fungi break down mineral materials to transport to plants. In an experiment involving biotite and the mycelium of the Brown Rollrim fungus Paxillus involutus it was shown how the fungal structure itself put immense pressure on the rock flakes, physically breaking them down and removing potassium and other minerals into the soil, to then pass to the plant.

Arbuscular mycorrhizal fungi can also benefit arable crops if innoculated. A recent meta analysis by Pellegrino et al, showed that, when innoculated with AMF, wheat yields could be increased by a massive 20%.

So that’s a brief insight into the fascinating world of mycorrizhae. If you share my interest in soils I suggest you follow the ‘Common Soil’ facebook page or visit their website – a wonderfully vibrant and fresh project that has sprung up in the last few years aiming to change the way we see ‘dirt’.

5 thoughts on “Secrets of the soil: mycorrhizal fungi”