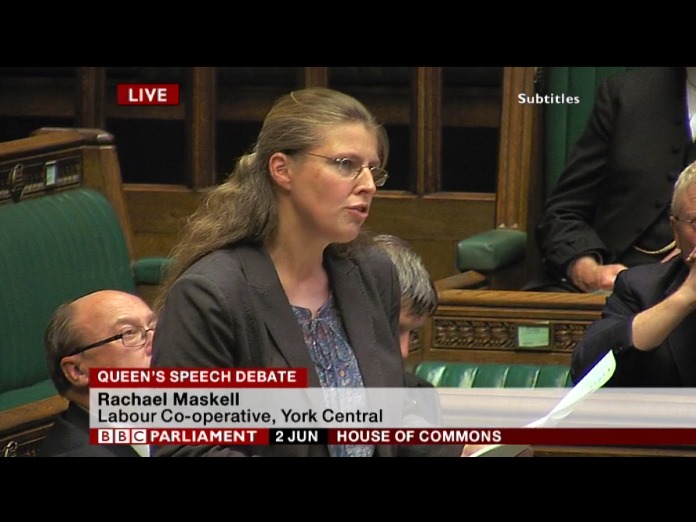 Now, as readers of this blog I would like to think that you are all fairly politically and environmentally aware and would therefore recognise the name Rachael Maskell. Yes? No? Well, if you do you are probably doing a lot better than most people. Certainly, I had not heard of her before Jeremy Corbyn appointed her to the position in the post Brexit shake up, and I wouldn’t have even known she had been appointed had it not been cfor coverage from BBC Farming Today with Charlotte Smith, rather unfairly I thought, quizzing her on her farming knowledge in her first week of the job. As it’s Labout Conference week I thought I’d profile her to try and get to the bottom of who our new (ish) head of Defra opposition really is.

I started by taking a look at wikipedia (that go-to source that we rely on all too often) which told me that ‘Maskell is a keen cyclist and rode the trip to Labour Conference 2015 in Brighton from Parliament in aid of British Heart Foundation‘. This is an interesting fact and to be frank, I am impressed. However, whilst highly commendable, cycling 50 miles doesn’t tell me anything about her stance on whether or not to ban glyphosate, whether the EUROP grading system needs to be modernised or whether driven grouse shooting should be banned. Wikipedia also told me that she is a physiotherapist by training and has worked in the NHS for 20 years. In fact, in her maiden speech in the House of Commons she called on the government to provide a new mental health facility for the people of York. Further, on 8th July 2015 she was elected to the Health Select Committee.

All this is making me think, ok then, why isn’t she shadow Health Secretary? Surely she would be well placed in that role? Or at least, perhaps better placed than Diane Abbott who before entering Westminster in 1987 was briefly a civil servant and then worked in the media. True, Abbott has vastly more political experience than Racahel Maskell but does experience in the field of responsibility not give the public more faith and therefore gives the holder a certain gravitas? Well, as we all know, politics is politics (in the same way that Brexit is Brexit), and it rarely ‘makes sense’. Nevertheless, I do wonder whether it was a surprise for Maskell herself, to find herself shadowing Andrea Leadsom and having to learn about

True, I shouldn’t be relying on wikipedia for all of my information. Let’s take a look at her website. Straight away I am faced with a picture of her in her constituency, York Central. Nothing strange there I suppose. Some people on the twittersphere have condemned her for having an urban seat. However, I think this is beside the point. For one thing, shadowing Defra is not all about getting into your wellingtons (although in my mind a Defra shadow secretary should be in wellies more often than not). In 2015, York was one of the cities that was worst affected by the floods that hit several parts of the country. We need to recognise that there is no such thing as a ‘rural/urban’ divide. The future (I predict) is going to be about that wonderful rather non user friendly term, ‘ecosystem services’. Those working in the countryside will be paid for providing services to those living and working in the towns, and that includes flood prevention through natural measures such as practices that help ‘slow the flow’. Having an urban Defra shadow or indeed an urban Defra secretary can in some ways help to bridge that perceived divide and get people in the countryside and people in the towns looking at each other’s point of view. So, I have no problem with her coming from a city centre seat (plus, as cities go, York is pretty small).

Her website also tells me that, in Parliament, she has recently called for a ban on snares and back in July pulled Liz Truss and Defra up on being ‘woefully unprepared‘ for Brexit (which, I gather, they still are). She has also asked questions on fracking, backed the air quality bill and been on the case regarding York’s flooding.

What about her voting record?

Well, her ‘theyworkforyou’ page actually does her credit, showing that she has a strong work ethic and has spoken at 105 debates in the past year, well above average for MPs. Her recent appearances include attendance at the recent Badger Cull debate on 7th September which showed that she has begun to grasp the issues although, in my view, she could still be harder on the government. She has raised the issue of women receiving equal pay in the agriculture sector which must be applauded. She has also asked about poultry welfare, the banning of microbeads which was recently successful, and food waste. The long list of requests for written answers and other items can be found here.

Clearly, she is doing a lot behind the scenes but she could do more (no I’m not just syaing that). Her job is incredibly important at the moment. Pushing the government to keep farmers and the environment sector informed as Brexit moves on and holding Andra Leadsom to account is vital. She is active, as her twitter account shows, but she could be more ‘bolshy’. This said, if she is allowed to stick with the role, there is nothing to suggest that she wouldn’t do a good job. I think her NHS background helps her as it has meant she has led a career that has involved a good deal of listening. If she can listen to farmers and conservationists and can translate what they say into a plan that moves us forward together then I think she will do well. If she doesn’t then maybe she and Diane Abbott should swap roles (or maybe not…).