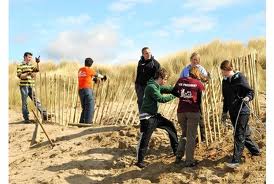 Images of Bristol University Conservation Group in 2012
Available at http://www.thisisexeter.co.uk/Students-dig-project-help-protect-sand-dunes/story-15588106-detail/story.html#axzz2NDnnN4im

This weekend, along with another 8 volunteers from Bristol University Conservation Group, I battled wind and rain to repair the defences to the dune system that the group put in place last year. A Devon County Council Scheme, the structure consisted of a stake system with chestnut paling strips of fencing creating a groyne system. The idea was that the sand would be moved down river and get caught up in the groynes, building up the dunes and preventing the sand from getting onto the coastal road. However, when we arrived we saw the devestation that had taken place. Three weeks after we had left last year a late winter storm had come in and washed most of the defence away. What was left looked very sad. We began to restake it with 7 foot stakes this time, digging them in three feet under. I am confident that this time they should stay.

What frustrated me, and I realise that this is a problem with all projects everywhere, was some of the negative feedback we received from residents. There were many positive comments it must be said but there were some individuals who were not only abusive but were down right negative. I bounced a comment back to one particular lady asking her to offer forward a suggestion as to an alternative way to solve the problem. She couldn’t think of one and consequently went on her way. Grumblers exist everywhere. This I think will not change. However, as a society we can become more conscious and forward thinking and instead of thinking ‘I don’t like this I want it to go’ we should be thinking ‘if there’s a problem lets try and think of the best possible solution’. Lateral thinking is what is required. Positive thinking is what is required. Negativity is not something I like. Let’s try and at least stamp it out of ourselves if we can’t stamp it out of others.