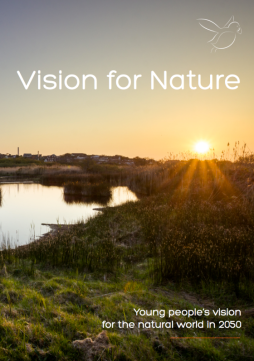 Eighteen months ago Matt Williams and Lucy McRobert, from the youth conservation network A Focus On Nature, invited me to join a committee tasked with running a campaign getting young people to think about a ‘vision for nature‘ for the next generation. This campaign has culminated in the publication of a report, released today, which aims to galvanise young people as a political force for nature and to send a message to the heart of government that the next generation are closely watching their actions and are determined that the natural world should not be put under greater and greater amounts of stress. A recent CensusWide poll of 1000 people, commissioned as part of the Vision for Nature process, has shown that almost nine out of ten young people think it is important for politicians to take care of wildlife and the environment.Further, 2/3 of 16 to 34 year olds were shown to see the environment as a top voting priority.

I strongly recommend you read the report itself and this blog post will not detail all of the recommendations and visions presented. However, I want to say how proud I am of the team who have worked so diligently and passionately on putting the report together, over the months that it has taken to research, write and edit it. It has been a true joint effort and has brought together young people of all talents, including young artists and writers. It was an aim at the start to make this a slightly different kind of report and we wanted to include a creative element to present the multiple ways in which young people interact with and appreciate the natural world. I want to thank Matt Williams especially, who led the campaign from the beginning and has been central to the whole process of putting this project together and seeing it through.

It was a privilege to lead on the food and farming section of the report (pp.17-20) and although the relative brevity does not allow for a detailed appraisal of what the future of food and farming could be, it provides an opportunity to grow a conversation that lifts conservation into the heart of discussions about food and farming. For me, the two are intrinsically linked and we must not forget to argue the case for stringent protection of wildlife within farmed landscapes, especially in the light and the scenario of the Brexit negotiations.

I hope you enjoy the ethos of the report and join the Vision for Nature campaign and the conversation over the coming months. If you have any specific comments I would love to hear them below. Please also be aware that there will be a number of topic specific blogs published on the A Focus On Nature website over the coming days, one of which I have written on the subject of Food and Farming.

Please help us publicise the report by spreading the word about it using the #VisionforNature on social media. Thank you!