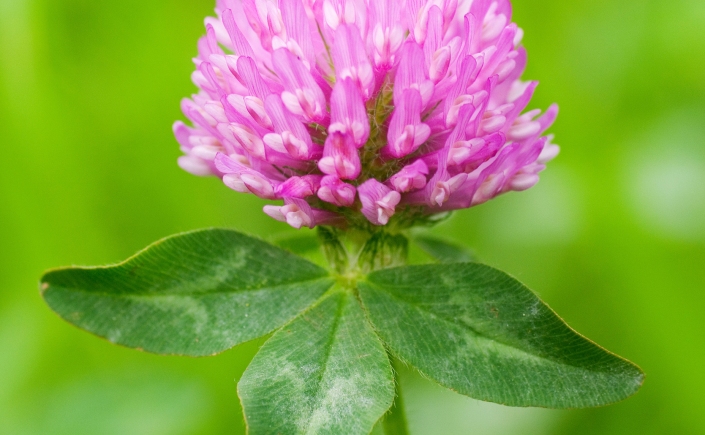 If you are talking to an organic farmer and the subject of clover comes up in conversation, prepare to be there for a while. Why are farmers (and especially organic farmers) so interested in clover? Well, both red (trifolium pratense) and white (trifolium repens) varieties (there are about 300 species of clover or trefoil in all) are high in protein and fibre, making good livestock forage, and are leguminous (nitrogen fixers) and so are beneficial to the soil.White clover is now most plentiful in Europe where it is native but is also present in large amounts in North Africa, West Asia, North America and New Zealand. Red clover can be found in similar locations but is native in Europe, Western Asia and North-West Africa.

This article will try to explain what the key differences are between these highly visible members within our agricultural ecosystems (other than the obvious that one grows red or purple flowers while the other grows white flowers) and explain some of the problems that have been raised regarding it (especially with red clover).

Firstly, red clover is classified by its growing season of flowering (early, intermediate or late) and white clover by its size (small, medium, large). Further, red clover grows upwards and tall whilst white clover spreads outwards, persistently spreading and reseeding itself (indeed repens is Latin for ‘creeping’). Whilst both perennials, white clover tends to have a longer life-cycle than red which only lives about two to three seasons on average.

Both types, white and red, are seen to be of great benefit in terms of grazing although white tends to be preferred within strict grazing strategies and red for use in hay and silage making. If over grazed red clover can be depleted very rapidly, particularly by sheep. All clovers, including white, are useful nutritional supplements for livestock as they possess a varying amount of vitamins – A, E, C, B-2, and B-3, calcium, chromium, lecithin, magnesium, potassium and silicium.

It has for a long time been suggested that red clover causes temporary infertility in female sheep when they are grazed on it during the breeding season (tupping). The reason often given for such infertility is the existence within red clover (and some other leguminous plants) of an oestrogen-like substance called phyto-oestrogen. However, there have been few studies confirming such as link and on the ground there are many stories of farmers grazing their ewes during tupping on a red clover mix with other grasses or white clover and not recording any significant decreases in lambing rates. In fact, Ulf Kintzel (see reference below) has positively encouraged integration of red clover to sheep pasture grazing regimes, claiming no negative effects. It would seem that there are actually many positive effects for using red clover within the grazing regime. As Kintzel points out ‘red clover is high in digestible nutrients and is well liked by sheep. High amount of nutrients, digestibility, and intake all enhance animal performance.’ Perhaps one of the only key negative attributes of red clover for sheep is that it can cause bloat. Some farmers however are adamant that red clover causes some effect to lambing figures and so refuse to graze on red clover 8 weeks either side of tupping.

Clover also has a base in the ‘alternative medicine’ lobby, who have for many years included clovers in their cupboards as a preventive medicine for a range of conditions from bronchitis to ulcers and asthma to syphilis. However, there is not enough scientific evidence to determine whether it is effective for any of them.

So, that’s red and white clover in a nutshell although much more detail could be added. Important in forage and grazing regimes as well as a key component in the methods used by farmers to ensure fertility of soils, next time you look over a hedge or fence and see some clover think about its importance within the agro-ecosystem and give it some credit for the vital role it plays.

http://smallfarms.cornell.edu/2013/01/07/does-red-clover-cause-infertility-in-sheep/ (article by Ulf Kintzel on whether red clover causes infertility in sheep)