The rewilding fraternity seems to have gathered its main focus thus far around making a case for upland landscapes as the most likely or suitable hosts for rewilding projects. The more productive and urbanised lowlands feature less in the debate. One could say that there are many logical economic and ecological reasons for this. Nonetheless, there is value in reflecting on the prospects for ‘rewilding’ parts of lowland landscapes. Many such projects already exist, such as the case of the Knepp estate, which I visited last month.However, are there examples of ‘rewilding projects’ that may not necessarily be initially recognisable as such? Are there certain key characteristics that rewilding is defined by or is it a more flexible and fluid concept? Critically, is rewilding a viable alternative mode of conservation for the lowlands and can it help small and medium sized farms become more resilient moving forward in an uncertain future? Yesterday morning I set off down the A37 to Dorchester (or Charlton Down to be precise) to spend the day at the ‘Rewilding Dorset‘ Conference, organised by Bournemouth University and Dorset Wildlife Trust, to try and answer some of these questions. The conference came about due to a desire to engage with the idea of lowland rewilding and to specifically ask whether rewilding is a viable conservation strategy for the county of Dorset?

The day was divided into four sessions, during which a number of guest speakers put forward ideas, explained concepts and key examples of conservation activity throughout Dorset and other southern counties.

The first session, during which Professor Paul Jepson from Oxford University and Dr Christopher Sandom from the University of Sussex spoke, focused on rewilding in broad terms, the opportunities it could provide, the risks it might entail as well as policy and practice. It soon became clear that whilst there may be broad agreement relating to definitions of what rewilding actually is, in reality it could relate to a much broader church of thought that the Monbiot framework set out in Feral. Near the start of his presentation Paul Jepson boldly stated that ‘rewilding is a bit more than George’ – a good thing to hear at this early stage in the conference. George Monbiot is a great asset for the sector and for rewilding (and I personally hugely admire him as a polemicist and writer) but his tone has been, quite frankly, aggressive to certain groups in the past, consequently isolating many people who have a key role to play in terms of land management – farmers and staff of National Park Authorities spring to mind. If you isolate people they aren’t very likely to cooperate in future. It is time that we take a step back and have a greater diversity of people involved in the rewilding conversation. We need reconciliation, not confrontation if we are to achieve a more varied and biodiverse landscape in the future. This means engaging with ‘non-conservation’, non-NGO landowners and farmers, working with them and encouraging them to see rewilding in some places as an opportunity, not a threat. On this note, it was brilliant to meet the new Director of Rewilding Britain, Helen Meech, face to face. She has exactly the right sort of attitude for moving forward in this way, building bridges and connecting disparate groups which is, I feel at least, absolutely necessary. 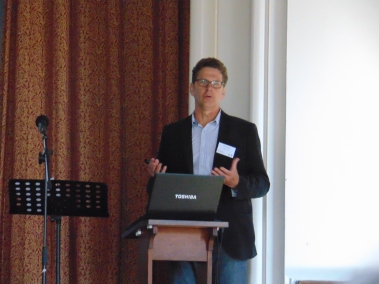 Jepson called on there to be a greater number of large scale, public rewilding experiments, saying that ‘Brits love funky experiments’ – not often a turn of phrase you hear from an academic but one that I agree with. To get people behind a concept, particularly when it comes to engaging people with nature conservation, you HAVE to make it exciting. The media has latched on to Sergey Zimov’s Pleistocene Park and the case of the Heck cattle largely because they are a bit weird and wacky. The seriousness and integrity of projects must remain but it is critical that the marketing of rewilding and the way the public are engaged about it is made relevant, intriguing and approachable. It is one of the reasons why Charlie Burrell  and his team at Knepp have been so successful – they are very good indeed at public engagement and are not only able to educate but to turn a profit at the same time as doing so.

Chris Sandom on the other hand switched the focus to projects on the ground (although quite a lot theory was explored first – it would be as he is an academic). He made a distinction between ‘active’ and ‘passive’ rewilding. ‘Active’ rewilding refers to species reintroduction, whereas ‘passive’ rewilding allows nature to ‘take its course’ without management, in other words, land abandonment, increasingly common in mainland Europe but fairly non-existent in Britain. He also raised the point about baselines – which historical baseline are we looking at in terms of a landscape to emulate? Primeval forest? Ice age tundra? Wood pasture? Many would argue we shouldn’t be focusing on baselines at all but looking forward to future ecologies based on local, regional and global contemporary climate and species present.

He also outlined a number of key factors he thinks we need to consider when talking about rewilding. These can be summarised as:

Sessions two and three of the conference, included presentations from four speakers relating to specific projects that may or may not be considered as ‘rewilding’ projects. Fiona Bowles from Poole Harbour Catchment Initiative spoke particularly well I thought on the work she and her team have been doing on Dorset rivers but it was unclear as to whether there might be a definite path ahead for shifting towards a more ‘naturalised management’ of rivers on a large scale. The key in the case of Dorset is the distinct lack of trees, often central to rewilding discussions when it comes to overarching ecosystem services and ‘slow the flow’ projects. Dorset is also an overwhelmingly farmed landscape which has big implications in terms of river management and nitrate/phosphate management in particular. Any ‘rewilding’ of Dorset rivers would therefore probably be distinctly different to river rewilding projects elsewhere. Fiona’s key conclusion was that we need to make more space for water and engage people to understand water flows and the reasons behind ‘slowing’ water flows being beneficial to communities downstream.

Professor Richard Brazier from Exeter University gave a superb presentation with a lot of scientific data relating to the beneficial ecohydrological impacts of reintroducing beavers in Devon. Further, Alison Turnock from Dorset AONB spoke of the work she and her team have been carrying out as part of the ‘Wild Purbeck Nature Improvement Area’. Whilst this latter project may not conventionally be called a ‘rewilding’ project it certainly deserved to be part of the dialogue and critically it offered a good example of the benefits of bringing organisations together to achieve objectives together. Dr Matthew Heard from the Centre for Ecology and Hydrology also gave an enjoyable talk about the Knepp Project, complete with hieroglyphics which amused, if perplexed, many delegates.

The final panel debate questioned whether rewilding would fundamentally be a viable conservation strategy for Dorset? The panel included Mark Robbins from the RSPB, Imogen Davenport from Dorset Wildlife Trust, Jonathan Spencer from Forest Enterprise England (Forestry Commission), Ian Alexander from Natural England and David Brown, an ecologist from the National Trust. Once they had given some initial comments on their interest in rewilding questions were fielded from the floor ranging from how best to fit humans into rewilded landscapes to how to contest access with rewilded landscapes, how to engage children and whether we are happy to lose species whilst gaining others? The conclusions to the overall question of the day ‘could rewilding be a viable conservation strategy for Dorset’ were mixed. However, I think that many people agreed that rewilding could play a part in an overall conservation strategy but perhaps it shouldn’t be branded as rewilding as such. By following the Lawton principles of ‘Bigger, Better, More, Joined’ and building partnerships conservation can take place on a landscape scale. It is unlikely that any charismatic megafauna will be roaming the chalk fields of Dorset any time soon but there is no reason why the county cannot become a bit ‘wilder’.

It became apparent, as it had been through the day, that different people mean different things when they speak of ‘rewilding’. Ian Alexander for example called rewilding a ‘trajectory or direction of travel’ and welcomed a return to focusing on ecological process. Imogen Davenport stated that ‘there are a huge range of definitions for rewilding’. In many ways it frustrates me that I have been encouraged to reflect overwhelmingly on the meanings of the term as I feel it distracts us from the ‘doing’ of projects and the analysis of practice but as it was a key part of the day I find I have to engage with it.

The other key thing that struck me about the day was not what was discussed but what wasn’t discussed. Although mentioned briefly at various times throughout the day two key themes were barely engaged with at all. These are urban rewilding (aka maintenance of brownfield sites/safeguarding of urban nature reserves etc) and (I was surprised at this being in Dorset) marine rewilding. There was one question raised by a lady near the end of the event about rewilded coasts and the panel acknowledged the ecological and economic importance of MCZs (marine conservation zones) but I feel that the event organisers missed a trick here. Marinescapes are so often forgotten and it would have been refreshing to see one presentation dedicated to the seas. It was good to hear in conversation with Helen Meech at the end of the day that engaging with the marine environment is high on her agenda for Rewilding Britain.

Overall, I was initially enthused by the day and it was, as always, a useful networking session. I want to thank the organisers for putting it all together (and for the brilliant lunch!). However, it was frustrating not to see many small and medium landowners/farmers present. The conference hall was dominated by conservationists and academics (and middle class, white, mostly male at that), something that is usual for such events and difficult sadly to get away from. In the final debate a farmer who had traveled over from Wales asked for members of the audience to raise their hands if they were farmers – just 3 people from over 100 were apparent. This spoke volumes. I’ve said it before and I’ll continue to repeat myself, farmers and small landowners control such a large proportion of Britain that it is vital they are engaged in conservation debates, as integral partners, not a ‘necessary evil’ they are sometimes encamped as. As somebody who I spoke to during a coffee break at the conference said, ‘rewilding is going to happen whether we like it or not’. I tend to agree with this statement. However, it must be inclusive as a process and farmers must be involved and not feel as if it is yet another ‘grand idea’ being imposed upon them by the green lobby. Rewilding is far more than the means of species reintroduction it is often portrayed as. Yes, this forms a key part but it is also about ecological restoration more broadly and it is in all of our interests, whether you are a farmer, a conservationist or someone else entirely, to work towards a more ecologically resilient world.