Last weekend I made a decision to walk in a new place in my local area. Usually when I go for a walk it will be to one of about six different places only. Sometimes I will vary the route slightly but usually it is a familiar walk, passing familiar trees and fields and although the landscape changes with the seasons it remains recognisable. It should be said that the landscape of this new walk didn’t alter significantly to my usual destinations; I wasn’t for example swapping marsh for mountain or beach for moor. It was a usual place of marshes and mudflats, typical of the Essex coast, but further along the wall than I had been before and more off the beaten track. In a place where development is becoming king and the term penurbia is becoming increasingly relevant it is sometimes nice to be able to escape to a place that is presently less affected. I could lose my senses in the wind, the long grasses and the big skies. Walks are superb for contemplation, for drawing new boundaries, for creativity and for reflection whilst also for moving forward.

I came across a houseboat, packed full of character and a boat who would tell some superb stories if only she were able to talk. She would make the perfect protagonist for a children’s book. She has been made to fit the twenty first century with a power generator attached, giving her movement and a sense of purpose in the ancient working landscape. The quay just down from the water, from where I set off, has for example been in use since the Roman period in Britain, if not before that. 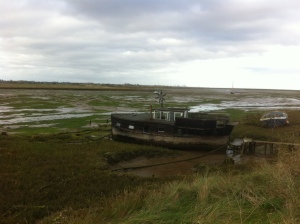 As I walked the weather changed, the light catching the flats beneath, whilst the trees and scrub on the shore cast darker shadows in other areas. When I returned to the beginning, by the base and foundations for an old mill, the rain began to fall, the cold wind blowing it into my face. Autumn is definitely here. The connection between people and this particular landscape is ancient but time has enabled each, at least in my view, to complement each other. The man made sea walls lie side by side with the saltings; the boats and telephone wires straddle the mud flats but do not impose their will, merely sharing the space with the curlew, snipe, gull and goose. This place was part of the setting on Arthur Ransome’s ‘Secret Water’, a place which he knew intimately. It is easy to see how he could be influenced and how the romanticism of the place could instil such a desire to write.

Thinking about this subject matter has made me return to Henry David Thoreau’s Walking. This is one of the naturalist philosopher’s most famous essays and one of my favourite pieces of writing. In writing this essay he eloquently explored the opportunities and wonders of immersing oneself in nature while lamenting the inevitable encroachment of private ownership upon ‘wilderness’. Without meaning to, it is such lamentation that I have fallen into the trap of exemplifying above. We still live in an age of romanticism, albeit a neo-romanticism set in battle against the technical and the built environment that some of us perhaps fear is moving too quickly. Thoreau declares that walking should indeed be intrepid and adventurous, even the shortest of walks:

”We should go forth on the shortest walk, perchance, in the spirit of undying adventure, never to return, prepared to send back our embalmed hearts only as relics to our desolate kingdoms. If you are ready to leave father and mother, and brother and sister, and wife and child and friends, and never see them again—if you have paid your debts, and made your will, and settled all your affairs, and are a free man—then you are ready for a walk.”

Thoreau would spend up to four hours per day walking or ‘sauntering’, through the woods, fields and hills, ‘absolutely free of all worldly engagements’. This is something in which Thoreau and I differ. I walk in order to reflect and no matter how hard I try it remains nearly impossible to cut myself away from my own worldly experiences. Certainly this is difficult in familiar environments. In foreign or unfamiliar environments it becomes easier, the breadth of new experience flushing over the walker, removing the concerns of the present with it.

The landscape local to where I live, along with the wider East Anglian landscape, and the majority of the English landscape (Scotland, Wales and Ireland differ in part) is almost entirely human influenced and therefore culturally we have been made to see beauty in such constructed landscape. Thoreau, in the United States, was able to experience landscape that has been less influenced by western civilisation and therefore took a different view:

”I can easily walk ten, fifteen, twenty, any number of miles, commencing at my own door, without going by any house, without crossing a road except where the fox and the mink do: first along by the river, and then the brook, and then the meadow and the woodside. There are square miles in my vicinity which have no inhabitant. From many a hill I can see civilization and the abodes of man afar. The farmers and their works are scarcely more obvious than woodchucks and their burrows. Man and his affairs, church and state and school, trade and commerce, and manufactures and agriculture even politics, the most alarming of them all—I am pleased to see how little space they occupy in the landscape.”

Thoreau did not despise civilisation per se but merely saw greater value than most in the non-western influenced natural world. The term wilderness has been much critiqued in the past twenty to thirty years in the manner that wilderness is not pristine but always changing and being influenced. I do not believe however that Thoreau walked in order to experience the pristine condition of the landscapes surrounding him. His walking went far further than that. Thoreau walked to experience the landscape for what it was at that time, appreciating the differences and changes as much as the continuities. More than anything however he appreciated the otherness and the complexities within simplicity that the natural world provided him with.

In Thoreau’s lifetime, and perhaps even more so today, we are always in a hurry to get something done, to travel somewhere, to meet someone, to carry out some business and therefore doing things slowly is rarely an option. There is always seemingly so much to do. In this Thoreau distinctly disagreed:

”Roads are made for horses and men of business. I do not travel in them much, comparatively, because I am not in a hurry to get to any tavern or grocery or livery-stable or depot to which they lead. I am a good horse to travel, but not from choice a roadster.”

Thoreau took all the time he needed. He lived for the present moment, to respect, live and marvel in the place or experience he lay within. Unfortunately I have fallen into the trap of the world we live in, having a million and one other things to do and so cannot continue this post. Perhaps it will form the basis for a future essay. I would however encourage everyone to go a little further out of your way when thinking of where to go for your next walk. New experiences can mean so much and open up many new avenues, we may just not see it until it happens. When coupled with walking these experiences become truly worthwhile.