2014 has so far brought severe floods, intense heat and abnormally heavy showers to the UK. As the autumn leaves begin to fall we must look ahead to the coming winter and hope that areas such as the Somerset Levels and the Thames Valley are not hit as hard as they were last year. Climate change is increasing the extremes in our weather patterns – that is clear – and it is frustrating that some, including the United Kingdom Independence Party, who have recently enjoyed a surge in UK political polls and indeed won my own local constituency in a recent byelection, continue to deny climate change when it is the biggest issue that human kind faces. UKIP would scrap the Department of Energy and Climate Change as well as introduce shale gas extraction (more commonly known as fracking) widely across the country. This is something I fear when I think of future energy policy. Certainly I welcome UKIP’s approach to localism in terms of suppressing housing where it is unnecessary (and I hope the Conservatives take note of this highlight in policy) but there is little continuity in their approach to the environment – indeed they would certainly want to ‘cut the green crap’ if they got even the smallest scent of influencing the government of the day. A conservative/UKIP coalition is something to fear as we leave next Winter, move into Spring and enter the Summer. 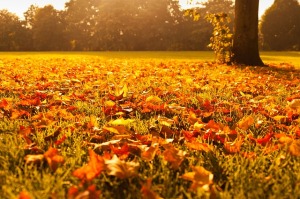 For now though we can enjoy the spectacular sights of the Autumn leaves: the browns, reds, yellows, oranges and all other shades in between, crunching leaves under foot and conker fights. Incidentally the World Conker Championships were held yesterday at Southwick, near Oundle in Northamptonshire. Stephanie Withall and John Doyle emerged victorious as King and Queen Conker, another little reminder of the eccentricities that gladly remain within British culture, an ode to frivolity and a kind reminder that we should never take life too seriously. I hope that everyone enjoys the crisp sunny days that Autumn brings and that you are able to get outside to view the spectacular shows that nature provides at this time of year, from the leaves we have already talked about to flocks of migrating birds offering their displays in the heavens and the free food on offer in the hedgerows. I spent my Sunday morning picking apples in the orchard on the farm with a mind to make a few different varieties of cider (we are lucky to have several different old English varieties including Bernewode Crab Apple, Grey Pippin, English Codling, Sykehouse Russet, Cornish and even a tree descended from Sir Isaac Newton’s famous apple tree). I’ll have to wait to see how they taste. This will be my third year of making cider – so far I have had mixed results! This evening I started to make some sloe gin and there are also blackberries and sea buckthorn berries to sort. Autumn really is a spectacular time.