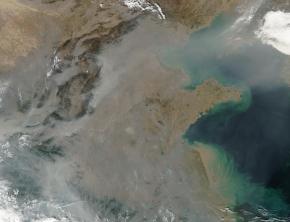 The title of this post says it all. China’s Environmental Protection Ministry has released a report of an official study conducted between 2005 and 2013, which showed that 16.1% of China’s soil and 19.4% of its arable land are contaminated, principally with excessive levels of cadmium, nickel and arsenic. It is well known that China’s industrial boom has been substantially increasing in scope in recent years but the environmental effects of this rapid industrialisation are only just becoming apparent. The worst affected areas are the Yangtze River Delta in eastern China, the Pearl River Delta in the South and the north-east, which has been an ‘industrial hub‘ for many years. China drastically needs to get a grip on its pollution levels which will have severe knock on effects on the future management of good public health. Unfortunately the problems seem to be getting more complex and increasingly geographically wide in scope, making any clean up operation very difficult to plan and implement.

Contaminated land poses a direct risk to the public through contact with, or ingestion of, the soil. Contamination can also undermine building foundations and pollute ground and surface water sources. Often when the media presents Chinese pollution it is presented as an urban problem. A problem primarily of human health. However, the latest findings show that the Chinese pollution problem goes far wider and deeper than the issue of urban air quality. Soil contamination affects the whole ecosystem. Of particular concern should be the effect soil contamination by heavy metals can have on drinking water as well as food production. Heavy metals can bioaccumulate through the food chain, concentrating levels in organisms and ultimately affecting human health. A further concern should be that the majority of the Chinese population fundamentally remain land workers, i.e. they have contact with soil on a daily basis. As contamination increases the risk to this sector of the population also increases and the strain on national healthcare becomes more acute. The international community should applaud China for carrying out the report in the first place and for making the results open for viewing (they could quite easily have been kept a state secret). However, the hard work is upon the Chinese government now to get a grip on the issue. The international community should provide support in whatever way it can to avoid a future human or ecological disaster and to try and halt the spread of pollutants before the situation gets any worse.